How can I take action? 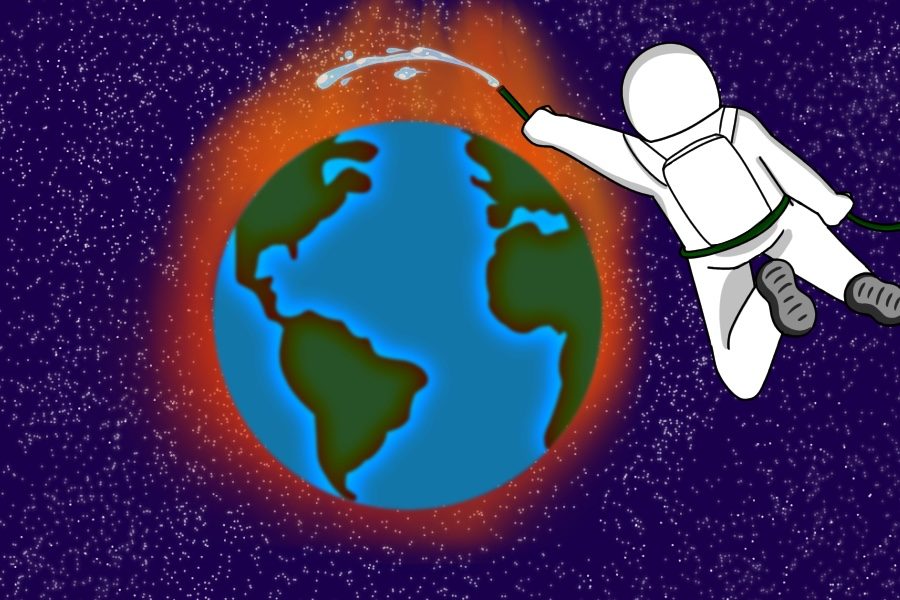 With the reality as daunting as it is, everyone needs to do their part to save the Earth. Original artwork by Evanthia Stirou.

At this point, almost everyone has seen the jokes about using metal straws. While slightly uncouth, these jokes do raise a serious issue. Things like refusing a plastic straw at a restaurant, trying to reduce your waste production, or even driving an electric car, while valiant efforts, are not going to stop Climate Change. It’s a few big corporations that are producing excess pollution, greenhouse gases, and harmful chemicals.

So what can average people do to help?

One thing Dr. Suprenand would like to see happen is for the Saint Stephen’s community to tackle its carbon plastic problem. Realistically, this would be no easy task. Plastic bottles and plastic utensils, along with a whole host of other nonbiodegradable products, would all need to be replaced with more environmentally friendly options. Just because it’s not easy doesn’t mean it’s impossible, though.

“Smoothie King now uses biodegradable products,” Suprenand points out, and “Eckerd College, several years ago, developed a reusable tray that you can go get your lunch, use it and then put it back into the machine where it is washed for reuse.”

Additionally, people need to think about Climate Change in a global sense. Dr. Suprenand encourages Saint Stephen’s students to look at this issue in a broader context, in order to realize their potential as global citizens and scholars.

“There are a lot of cool things you do in the upper school, and one of those cool things is the IQ week trips,” Suprenand reminds the high schoolers. “You get to go to these places all over the world and the United States. Imagine if all of those opportunities to see and experience those places and their uniqueness was lost.”

One example he provides is that of the Inuits living in the Arctic, who are people who have subsisted directly from the land and the ocean for thousands of years. As ice melts and the Arctic ecosystem is increasingly battered, these people are impacted immensely.

Dr. Suprenand said, “the health of the [Arctic] ecosystem really foretells the health of those communities, and to think just about the animals’ health is one thing. But you also have to think [the Inuits] have to go on the ice to hunt, and so if the ice starts to be lost, or it’s unsafe because it’s so brittle, you’re talking about cutting off people who have one primary set of traditional food sources that no longer will be there.”

To let the Inuits die off thanks to environmental factors they had little to no hand in would be a tragic failure of the global bond and system all citizens of earth are supposed to share.

But probably the single best action teens can take is to make their voices heard, as they did at the rally in Sarasota. The truth is, young people have been wronged. They were born into a society where Climate Change has, in some cases, already begun to run its course. They deserve the chance to stand up for their health and safety, and they have the moral force to demand to be listened to. And while it can be scary to advocate for an issue that they know may not be received well, if they truly care about the cause, other’s opinions should be an afterthought.

Here’s a name that has been in the news a lot lately: Greta Thunberg. She’s a 16-year-old activist from Sweden who is not afraid to stand up for the cause she believes in. She is an inspiration to many, because she’s one of the few teenagers who is truly changing the world.

Comments are expected to be respectful and constructive. We do not permit the use of profanity, crude language, personal attacks, or the use of language that might be interpreted as libelous. Commenters must provide their name; no anonymous comments will be accepted.
All the Gauntlet Picks Reader Picks Sort: Newest