Here's how Falcons fared this winter. Included are the Winter Sports Awards recipients 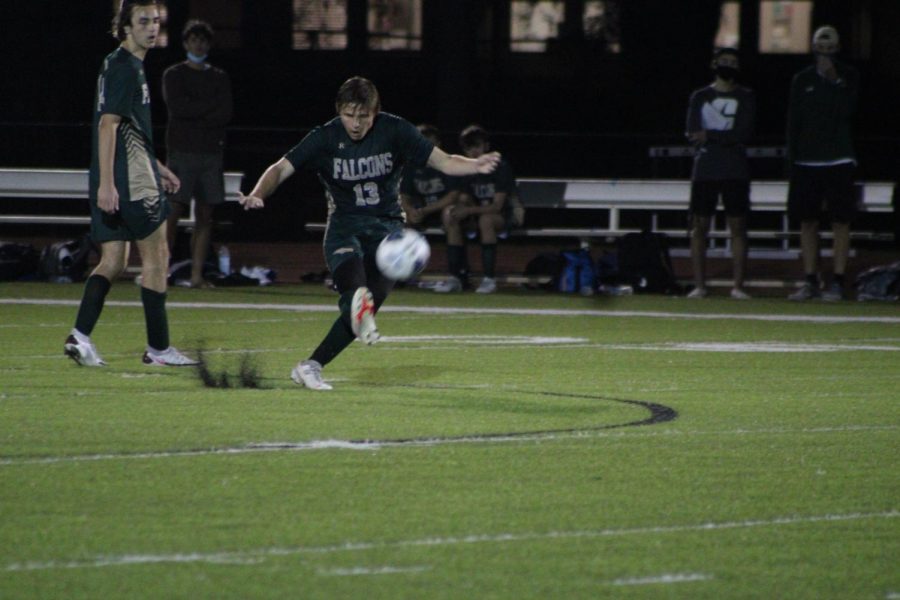 Sophomores Nolan Winterhalter and Garrett LaFlamme were the starting center defenders for the Falcons.

Although the spring season of sports is ramping up at Saint Stephen’s, the winter season is still likely fresh on the minds of many. It was a season marked by challenges, including but not only the restrictions brought on by the coronavirus, but also marked by many triumphs teams made in spite of those challenges. The teams made substantial progress this year, as shown below with information and commentary courtesy of Coach Paoletti:

Under first-year Head Coach David Vaudreuil, our varsity girls soccer team completed their season with an overall regular-season record of 5-7-3, with half of the losses by two goals or less. Our girls earned a spot at the District tournament finishing as the District Runner-up. They then traveled to Shorecrest Prep for the Regional quarterfinal game, losing 0-5. The varsity girls MVP was awarded to Janie Chatham, the Falcon award to Emma Craig, Defender of the Year to Sophia Creneti, Midfielder of the Year to Stacie Burgess, Forward of the Year to Kayleigh Vogt and the Program Player of the Year award to Taylor Vara.

Under first-year (long-time assistant) Blake Hoonhout, our varsity boys soccer team completed their season with an overall regular-season record of 11-4-1. The boys earned the #2 spot at the District tournament and then eliminated the #1 seed Bradenton Christian in the Tournament Championship game. As District Champions, we then went on to defeat Keswick Christian in the Regional quarterfinals 5-0, only then to lose to Bradenton Christian in the Regional Semifinals 0-2. During the regular season, all 4 losses were against the Manatee & Sarasota county public high schools with populations much greater than our own. The varsity boys MVP was awarded to Diamuid Harkin, the Falcon award to Alex Slowik and the Hayward Leadership award to Sean Rodriguez.

Due to injuries & illnesses, our varsity boys basketball team had a season of two teams. Our boys completed their season with an overall regular-season record of 11-7, dropping three games to local public school powerhouses. The team successfully earned the #2 spot in the District tournament but ended up facing new District team opponent Parrish Community HS, a local public high school sponsoring three grade levels and over 1100 students. The game came down to a last-second attempt, but fell short. The varsity boys MVP was awarded to Connor Davis, the Falcon award to Matt Vara and the Outstanding Improvement award to Braden Mohr & Michael Konkol.

The varsity girls basketball completed the season with an overall regular season record of 10-5, injuries plagued our starting five players and as a team we could never find our rhythm. Seeded 3rd in the District tournament, our girls defeated Parrish Community HS 64-18 in the District quarterfinals and defeated ODA 48-22 in the Semifinals making a loud statement. Unfortunately, the momentum could not get us passed Cardinal Mooney in the District Championship game and our girls earned the District Runner-ups. During the first half of the Championship game one of our players reinjured her ankle, eliminating her from the competition. With only two regular season starters healthy, our girls limped into St Petersburg Catholic HS to compete in the Regional quarterfinal game and lost 31-57. Still a fairly young team with 2 seniors, 4 juniors, 2 sophomores, 0 freshmen and one 8th grader, our girls are committed and will bounce back.

In addition to this, Falcon fans are probably also curious about how our Spring teams are currently doing. Thankfully, Coach Paolleti was able to provide a quick update on this, too:

The baseball team is still developing and searching for their first win. However, half of their losses have been by 2 or less runs.

Track & field just competed at Northside Christian and just about every single student-athlete has a personal best in every event. Their focus is on the District meet and qualifying for Regionals & State.

The current season seems to be off to a good start with more wins on the way. Go Falcons!