Divide and be conquered: Let’s bring back civil conversations

It's time for the right and left to start talking to each other again. 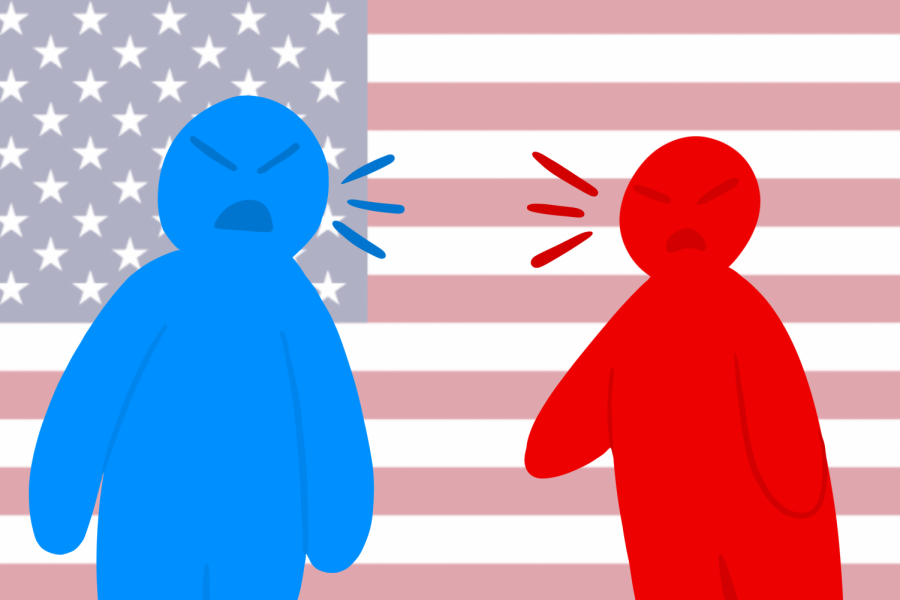 This image depicts the civil discourse between each political party.

As a nation, we have never been more politically divided than we are today. When it comes to political dialogue between liberals and conservatives, threats, insults, and yelling have replaced civil conversations and logical arguments. No one is willing to compromise or simply listen to the other side, and very few people can agree to disagree. In my view, this hostile mentality that permeates our social dialogue could be part of our undoing.

Recently, I was faced with this partisan hostility in my English class. Harkness discussions (“roundtable discussions”) provide the opportunity to bring up real-world related topics like politics, and it seems as though the subject is unavoidable. Although these conversations are mediated, they are not necessarily balanced or open to opposing viewpoints.

As a conservative, I found myself having to argue with multiple people at the same time, and I could tell that there was little attempt by my opposition to understand where I was coming from. In this case, our class was analyzing this media credibility chart, which ranks the supposed “credibility” of various news sites. I felt that some of the information was invalid or biased based on the reading I did about the chart and the placement of news sites I’m familiar with on the graphic.

I shared my discovery with the class and spoke about the importance of checking sources. I then began to receive some criticisms from my fellow classmates. They said that there were many of the same types of charts that all presented the same information, and therefore it had to be correct. Even the general statement that we, as viewers, need to research our sources, was met with indignation.

I came across another example of partisanship when browsing Youtube. This video by Jubilee truly highlights some of the deep-rooted political divisions within our country. The video is similar to a social experiment. A few individuals have to separate people into two categories based on their personality traits: “Divide us into Democrats and Republicans,” as the title suggests.

While I was watching this video, something in particular stood out to me. It seems that in our society, it is possible to dislike someone based on their beliefs rather than who they are as a person. As a result, we formulate opinions about others based on 1-2 beliefs they have, and often without having a full conversation with them.

In many cases, all we know is democrat or republican, and that’s enough to “know” that we don’t like them. A person’s actual character, personalities, and backgrounds are ignored.

This “lumping into groups” mindset has ended relationships and provoked hate for any opposing opinions. Respect and decorum have been shoved to the side as we continue to point, accuse, and berate.

The media also plays a large role in this dilemma by constantly feeding us information that is designed to make us angry and keep us apart. Whether we are aware of it or not, we are being conditioned to hate the other side. Above all, the media focuses on getting views. To do that they are willing to release more sensational claims and anger-inspiring content.

It appears that finding a middle ground has become nearly impossible. All we can see is our dislike and disagreements when it comes to our opponents. The phrases “I see what they mean” or “Let me consider that idea” are nowhere to be found. In reality, the divisions in this country are destroying it more than a single party ever could.

Some may make the claim that these intense arguments are necessary in politics. Discussions and disputes are what ensure fair outcomes and representation when making political decisions.

I am not suggesting the end of all debates, I am merely advocating for civility. We don’t have to be screaming at each other to get our point across, nor do we lose anything from listening to others. Some of the best legislature was born from compromise, and we lose some of that greatness when we so adamantly oppose one another.

Coming together would allow us to accomplish so much more. We should remember that we have many more similarities than we do differences. We all want this country to succeed. We all want this nation to be a place that is built on the founding principles of freedom and justice for all. It is in our best interest to try and see eye to eye again in order to achieve these goals. As long as we remain divided, we will begin to fall apart.